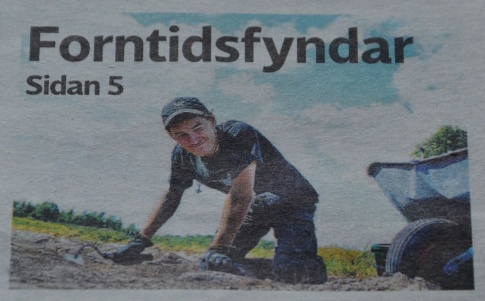 Anton as a front page teaser in the newspaper

Originally from the town of Uddevalla on the Swedish West Coast, I moved a few miles south to the “big city” Gothenburg three years ago to study archaeology. I recently took my Bachelor’s Degree there, so it seems to have gone quite well, and I’m just about to begin working towards my Master’s Degree. History and prehistory have always been my passion, and while my primary research interests have been quite different in the last few years, it was in fact the Baltic Iron Age which first caught my attention. At age four, I went with my family to Gotland, and was very excited by all the old Viking tombs, mainly beautifully preserved ship burials… and my parents bought me a wooden Dane axe-style toy. Big mistake. I kept running around screaming with it. Now, this summer, I returned to the Baltic Iron Age, although further to the north and with no axe.

I spent four full weeks at the Kvarnbo excavation, although it seemed almost like a lifetime – that’s probably because of the lack of WiFi and battery charging possibilities, though. I spent the four weeks at a campsite in Mariehamn, sleeping in a tent, which certainly took its toll. If it wasn’t for the magnificence of the project, if you pardon my hyperbole, I would have been complaining far more than I was doing. But a work experience so fulfilling and exciting can drive away the bothers of any living conditions, no matter how frugal. Although I have worked on prehistoric sites before, including one dating to the Vendel / Merovingian Era, there’s certainly no excavation in my short career so far that can match the one in Kvarnbo. Not only is it a fantastically fascinating place, with beautiful finds and ample knowledge to be uncovered, it has also been an excellent exercise in archaeological fieldwork. Although I did nothing during the four weeks that I technically haven’t done before, the work process has certainly opened my eyes to the uses and benefits of many strategies and technologies I have just barely considered before, including 3D-modelling, georeferencing, drone-based aerial photography, metal detecting, and plough layer digging. As I left the Åland Isles, that summery paradise (to tell you the truth, it was almost too summery sometimes, what with the nearly constant sunshine), I was filled with inspiration and new ideas for my future work.

Finally, something really must be said regarding the people of the excavation and of the Ålanders in general. Rarely have I ever been received as warmly as I was on Åland, or with such hospitality. Especially, the staff at the Kvarnbo dig – Kristin, Kim, Frands and Henke – were wonderful to work with, as were my fellow volunteers. No man can live on archaeology alone; such a lifestyle can only be sustained by the companionship of good colleagues.