The location of the Åland Islands in the Baltic Sea region

The geographical position of the Åland Islands (today an autonomous, monolingually Swedish-speaking region of Finland) between Sweden and Finland is highlighted in most of the few historical studies dealing with the region’s Iron Age (500 BC-1050 AD). Both western and eastern elements represented in the material culture are discussed, while the existence of an own identity of Åland, that of clearly different from Swedish and/or Finnish, is also emphasized. Especially, concerning the Late Iron Age (550-1050 AD), an almost unique combination of Scandinavian, Finnish and local material culture is demonstrated emanating from the studies of mortuary practices and artifacts. Given the precision of interpretations it is, however, paradoxical how very little we know about the infrastructure and social organization in Åland during Iron Age. What kind of social organization did Åland have? Was it an independent area, or dependent on an external power center? What kinds of changes took place in the Åland society over the course of the Iron Age? Much in these questions reflect our meager knowledge regarding Iron Age settlements on Åland. The development of infrastructure and social organization in Åland during Iron Age has been explained in reference to graves and mortuary practices. Change is justified with interaction between geographical and agro-technical aspects. There is a strong need for research based on settlement archaeology in Åland as it is the lack of knowledge regarding settlements that makes our picture of the Iron Age society and Åland unclear. Thereat it is also uncertain what role did Åland play in the Iron Age of the Baltic Sea region.

My project aims to account for and contextualize settlement development and change on the Åland Islands during Iron Age. A newly discovered site – a potential longhouse from the Late Iron Age with dimensions hitherto unknown in Finland, but with strong parallels in Scandinavian central places – will serve as a starting-point.

A number of interesting anomalies in the fields

In the beginning of 2012 an infra-red aerial photography showing the area around the medieval church of Saltvik on Åland Islands came to the attention of the archaeologists Rudolf Gustavsson and Kim Darmark at the Åland Museum. The photography shows a number of interesting anomalies in the fields north of the church. The most noticeable is an approximately 40 m long and 12 m wide impression in the vegetation that bears very strong similarities with the outlines of large longhouses structures known from Scandinavia. Furthermore, a pair of circular ground impressions of c. 10 m in diameter is possible to observe in the immediate vicinity of the large longhouse-like anomaly; and black, soot-stained-soil has been documented in the same area. The site is registered as Sa 14.9. 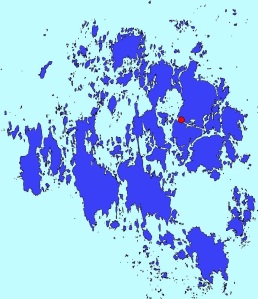 The location of Sa 14.9 on Åland Islands. Depicted shoreline is 10 m a.s.l. that is roughly corresponding the situation during Iron Age

Both the position by the church and the dimensions of the presumed longhouse bring similar structures at, for example, Gamla Uppsala and Uppåkra (Sweden) to mind – parallels that are further strengthened by the landscape situation and the history of the region.

Saltvik is situated centrally in Åland, and the area of interest is situated between 5 and 10 m a.s.l., by the Late Iron Age shoreline. The Åland landmass during this time was intersected by a multitude of smaller and larger waterways, of which two of the major straits conjoin at Sa 14.9. One of the richest Late Iron Age cemeteries documented in Åland, with 180 registered grave mounds, lies nearby. Also, in the vicinity – in contrast to the general lack of Iron Age settlement sites in the archaeology of Åland – traces of houses dated to the Late Iron Age have been recorded.

The name of Saltvik is a so-called “vik”-place-name and according to Bo Gräslund, the name indicates a Late Iron Age origin. According to Matts Dreijer, the name is indicating that Saltvik was an early medieval commercial center, a meeting-place for merchants. The former importance of the place is indicated in the written sources, especially, in the donation letter from June 8 1351 by king Magnus of Sweden and Norway. With this letter, the farmstead named Curia Saltwiik – a royal estate with surrounding land – was transferred to the holding of the Bishop’s seat in Åbo/Turku. The location of that farmstead is unknown. However, it is highly probable that it was located close to the church as a facility of such importance must have been situated centrally in the settlement.

The site Sa 14.9 is believed to include a Late Iron Age longhouse, of dimensions hitherto not known from the region and with potential for understanding the physical environment, the economy as well as the social structures surrounding the Late Iron Age people in the Saltivik region. During 2014, first field-investigations will be carried out at the site. However, in order to be able to analyze the newly discovered longhouse at Saltvik in its proper context, there is also a great need to conduct both descriptive and exploratory studies on the Iron Age settlement development and change on the whole of Åland (as well as make comparisons with Iron Age settlement in the rest of Northern Europe). In this regard, my point of departure is the registered and studied remains of ancient settlements. On Åland Islands there are around 10 areas with settlement remains known from the Early Iron Age and around 70 areas with settlement remains known from the Late Iron Age, but very few of these have been scientifically analyzed. I aim to discuss the data from the already studied settlement sites in a larger context and this project strives towards describing settlement development on Åland during Iron Age as well as clarifying and explaining its’ change.

© Kristin Ilves. Unauthorized use and/or duplication of material published in this blog without my permission is strictly prohibited. Excerpts and links may be used, provided that full and clear credit is given to Kristin Ilves and kvarnbohall.wordpress.com with appropriate and specific direction to the original content.