Some reflections on the Early Medieval Åland – settlement reduction or continuity 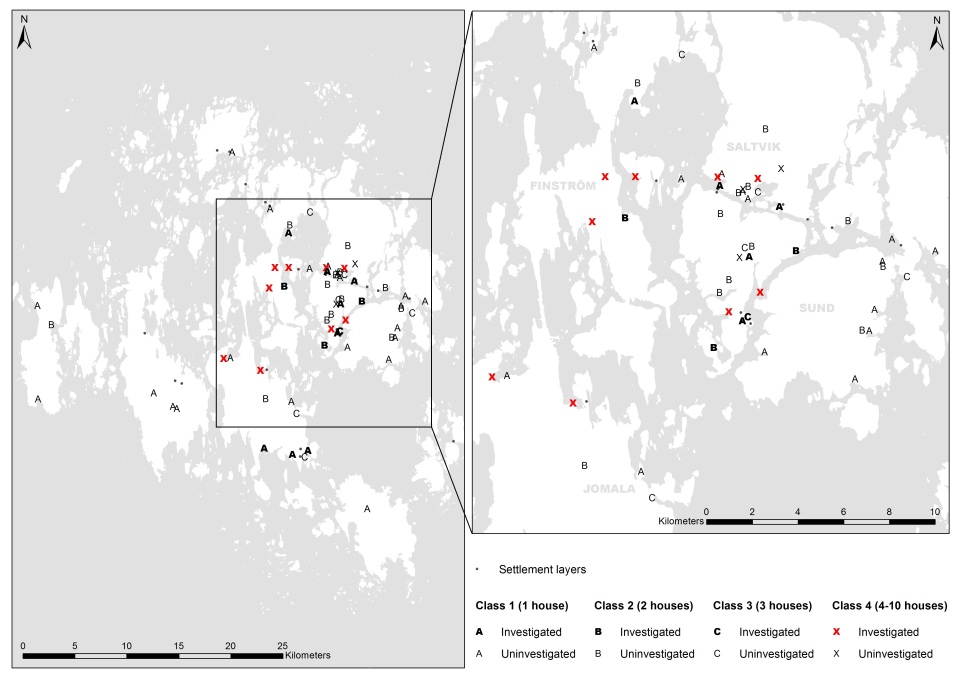 The reason why the early medieval settlement on Åland usually has been seen as solely consisting of single farms, is first and foremost due to the lack of knowledge of the early medieval (pre-manor) villages; their appearance, organisation, structure and layout, and the way they came to being. Instead, it has been the image of the high medieval and late medieval planned, regular shaped village with sub-divided fields, that has been used as a master sample of villages as a phenomenon. This becomes of course totally wrong, because Iron Age and early medieval kin-based villages (pre-manor) in Europe had as a rule quite different layouts and structures. Usually, but not always, they had a more dispersed layout, where the farms in the same village where set apart from each other, and connected to each other and the commons outside the fenced lands through cattle paths. Further, common fields did not exist within these villages in those time periods. This is also evident from all early medieval Germanic and Celtic laws. Instead, each farm had its own separately fenced field and meadowland, directly connected to the farmyard of each farm, why a distance of between 50–200 m often was created between the farms in the same village.

Another reason why various researchers have thought that the settlement consisted only of single farms is that no one has made any calculation about how much the destruction by cultivation has affected the preservation of the Viking Age settlement in the archipelago. Instead, they have usually only made calculations using the small number of houses left today at each separate location. Considering the fact that possible areas to cultivate in the archipelago only are available in limited smaller pockets between larger rocky areas, the destruction by cultivation of settlements remains on Åland must therefore have been very extensive.

Before the feudalisation, partible heritage was dominating as inheritance principle among the people in northwestern Europe. This is also reflected in the most known early Germanic, and Celtic laws, as well as in high medieval Nordic laws. In some of the oldest laws it appears that the eldest son usually inherits the paternal farm, while the younger build new farms in the vicinity. As long as there was space in the landscape, these kin-based illages and hamlets where thus growing into larger units. This course of events is also supported by several archaeological excavations of burial grounds nearby villages in many different parts of Europe, as well as some types of place-names such as the –ingas and –inge names. The glue that held those early medieval villages and hamlets together was thus kinship, and it was kinship and partible inheritance that created them!

In these parts of Scandinavia where intensive (feudal) lordship never was introduced, and where free farmers still dominated, it is well known, from post-medieval periods up to modern times, that they consisted of a bunch of related. Moreover, the layout of these villages had more in common with the pre-historic and early medieval villages and hamlets, than contemporary geometrically shaped villages with common and sub-divided fields.